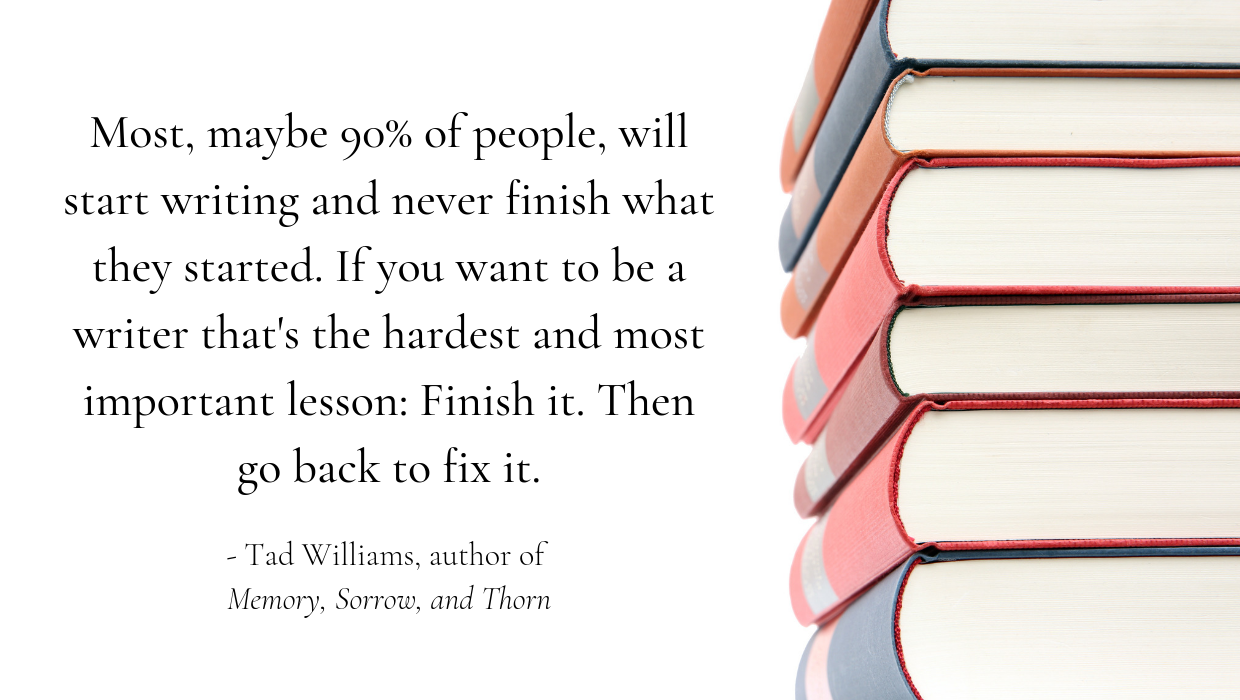 It was the motto of AspenHouse’s 2019 Writer’s Retreat: write terribly. We were all encouraged to write whatever came to our minds, no matter how bad. It was the best advice I’ve ever received as an author.

I have a huge problem with my writing. I want it to be perfect. This is in no way unique, as all authors want their books to be perfect.

My problem is that I want the first draft to be perfect.

I’ve been working on one book for about ten years now. I made more progress toward finally finishing it while I was at the retreat for a week than I had in the whole of ten years. It’s because I accepted one key thing about writing: it’s okay if my first draft sucks.

The lesson I most needed to learn was this: just write. It doesn’t matter how bad it is. It doesn’t matter if it makes sense the first time around. There’s a reason editing is a thing, and a reason it’s called a first draft. The phrase I learned in school is probably more accurate. It’s a rough draft.

Think of all your favorite books. Think of your favorite authors. Did they get it right the first time? Did they get it right the second, third, or fourth time? Probably not. Very few authors have their first-ever book become a worldwide bestseller with absolutely no flaws. The few books that go big by first-time authors tend to have major flaws (Twilight) or inconsistencies as the series progresses (Harry Potter).

What we all need to do is stop comparing our first drafts with the published bestsellers. My favorite author, Brandon Sanderson, has never published Dragonsteel. It was his first book and even he says it’s so terrible that he’ll likely never publish it. Even his first published book, Elantris, is nowhere near as good as his later works. It would be a crime to myself as an author if I tried to compare my work in progress with his Stormlight Archive series.

It’s okay that it’s not as good, though. He’s further along the authorial path than I am. I might be where he was when he was writing Dragonsteel and Elantris. Maybe in ten or twenty years, I can be where he is now. If I keep letting myself write terribly now.

As you think of your favorite author, remember how long it took them to get where they are. Remember the struggles they went through. Don’t look at them now and think you need to be as good as them right away. However, don’t stop striving to get there eventually.

Another problem I have that goes along with wanting my book to be perfect is editing it to death. This is one of the worst things any author can do. Trust me – don’t edit your first draft before it’s done. This also means you shouldn’t waiting months between writing.

I find that if I wait too long I have to reread, which means I rewrite as I run into mistakes or phrases that could be better. My work gets more edits than progress toward The End.

The motto of the retreat prompted me to just keep writing. If something needs to change, I make a note on the side and I can edit it later. Not when I can’t think of something to write, and not when I am rereading. Later is my first self-edit after the book has been written.

Things change as you write a book, especially if you’re a discovery writer (or pantser). That’s okay. Let it change. Make a note and smooth out the plot holes and inconsistencies later.

You are your own biggest hurdle.

Back in 2002, before the age of self-publishing, Jenkins Group published a survey that showed 81 percent of Americans had an idea for a book.

Tad Williams, author of books such as The Shadowmarch Series and Memory, Sorrow, and Thorn, said, “Most, maybe 90% of people, will start writing and never finish what they started.”

That’s a tragedy. Think of all those stories someone has in their mind that will never be shared. A story that will never even have the chance to reach the minds of people across the world.

It doesn’t take much to write a first draft. Just an idea and the dedication to stick with it. You can be an author. You can write a book.

Write terribly. Write garbage. Just get it written, and edit it later.